CVS-Aetna deal could revolutionize how drugs are paid for

A merger of CVS and Aetna would create a health-care behemoth and put huge pressure on standalone players such as Express Scripts Holding Co. and Walgreens Boots Alliance Inc.

If Aetna Inc. is eventually swallowed by CVS Health Corp., an important part of the health-care business will be changed — perhaps for good.

For years, pharmacy benefits were largely carved out from the rest of a medical coverage plan. But increasingly the two services are being combined, a move that in theory will make it easier to verify whether expensive drugs are worth the cost. A merger of the third-biggest health insurer with the largest U.S. drugstore chain, which also operates a pharmacy-benefit management company, could speed the process.

“You are hearing the warning for the end of the road for the classic standalone” pharmacy-benefit business, said Pratap Khedkar, managing principal at consulting firm ZS Associates.

Drugmakers are producing more pricey treatments for cancer and rare diseases. Combining drug and medical benefits in the same place is “the only way” payers will figure out whether such expensive new drugs are actually making people better and saving money by keeping them out of the hospital, he said.

A merger of CVS and Aetna would create a health-care behemoth and put huge pressure on standalone players such as Express Scripts Holding Co. and Walgreens Boots Alliance Inc. Express Scripts would become the last major standalone pharmacy-benefit manager not allied with a major insurer.

CVS and Aetna have held discussions about a potential deal, according to people familiar with the matter who asked not to be identified as the details aren’t public. A newly combined company would “own the entire chain, from prescribing and filling prescriptions to the health plans that pay for them,” said Michael Rea, of Rx Savings Solutions, which has an app that helps patients find lower cost drugs.

Under a combined roof, the insurance arm of CVS-Aetna could help keep costs down by routing patients needing basic urgent care to CVS-owned walk-in clinics and keeping them out of expensive hospital emergency rooms, analyst Ann Hynes of Mizuho Securities said in a note to clients. The company would also become a formidable competitor to UnitedHealth Group Inc., the biggest health insurer and owner of its own PBM unit, OptumRx.

But even with the new clout, a merger isn’t likely to be derailed by federal antitrust authorities, said John Briggs, an antitrust attorney at Axinn Veltrop & Harkrider in Washington.

Continued on next page >>> 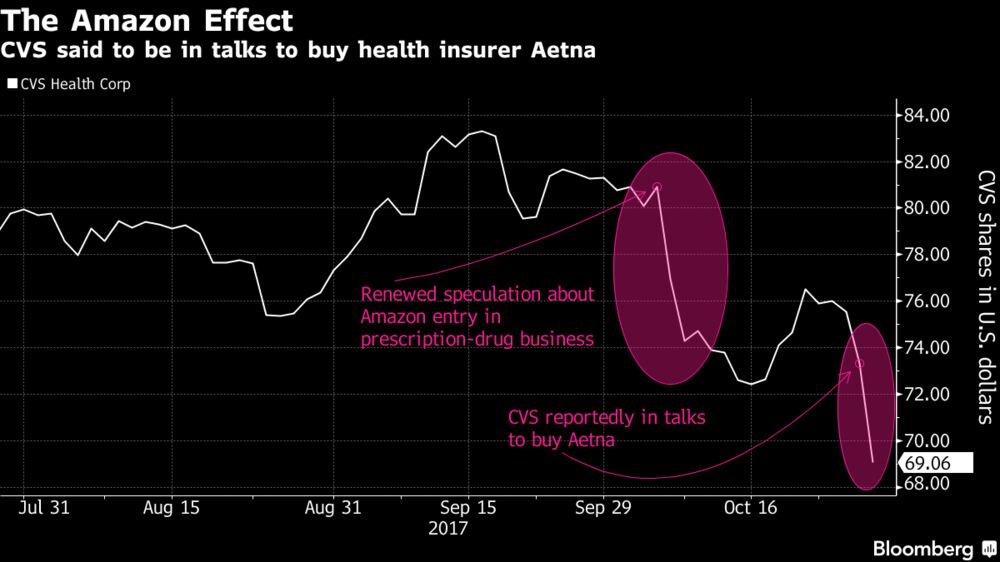 Walgreens, the No. 2 drugstore operator, could also feel the pressure. A CVS-Aetna marriage could cause the drugstore chain to look for its own acquisition targets, with Express Scripts being the most likely, Charles Rhyee, an analyst at Cowen & Co., wrote in a note to clients Friday.

And then there’s Amazon.com Inc., which recently gained drug-wholesaler licenses in 14 states. The looming threat of the e-commerce behemoth entering the mail-order pharmacy business and pushing down profit margins for drug distributors, benefit managers and retail pharmacies intensifies the pressure on standalone players.

For CVS, the move is “a natural defense against the potential threat of Amazon entering the retail pharmacy market,” Rhyee said.

Another possibility is that Amazon could buy Express Scripts. That would give the internet retailer an instant and large foothold in both the PBM industry and the mail-order pharmacy business.

Health insurer Anthem Inc., Express Scripts’ biggest current client, announced earlier this month that it would leave Express Scripts when its contract ends at the end of 2019 to form its own PBM unit. And Prime Therapeutics, another major player, manages drug benefits for nonprofit Blue Cross and Blue Shield plans in numerous states.

“Our model is strong and thriving,” said Jennifer Luddy, a spokeswoman for Express Scripts. “We believe in the value that we provide to our customers as an independent PBM.”

On an earnings call this week, Express Scripts Chief Executive Officer Tim Wentworth said he was open to a deal with Amazon to help serve cash-paying patients.

In terms of the CVS-Aetna deal, antitrust authorities will look closely at the competition between the companies in selling Medicare Part D plans for the elderly, said Briggs, the attorney.

There could be fight between the Justice Department and the Federal Trade Commission, which share antitrust enforcement, over which agency will investigate the merger, according to Briggs. The Justice Department handles insurer mergers and successfully stopped the combination of Aetna and Humana Inc. this year. The FTC investigates retail pharmacy deals. In September, it cleared Walgreens’ acquisition of 1,900 Rite Aid Corp. stores after Walgreens shrank the size of the deal.

Still, a CVS-Aetna deal would likely win approval because a number of other major players will remain in the Part D market, he said.

“That’s an easy fix,” Briggs said. “The whole deal is not going to crater on account of Part D.”

Keep an ear to the ground: How employers can stay on top of employees' mental health needs

Even with many states reopening, mental health issues and anxiety are still elevated, and employers must be prepared, says KOA Health's Oliver Harrison.

This year, Disability Insurance Awareness Month is more important than ever.

Growth is expected to keep up for the 'foreseeable future.'

Put together the right employee healthcare packages, every time. Help customers adjust on the fly. Know your clients better than they know themselves. Be the trusted advisor they can’t live without. How? Use health analytics to identify needs, stay on top of key trends, and give you an upper edge.