Vice President Diane Gallagher is responsible for developing content and value-add programs for clients and is also a spokesperson on retirement investing.

Diane earned a bachelor’s degree in communications, magna cum laude, from the University of Detroit. She is accredited by the International Association of Business Communications (IABC) and has earned many awards for her communication programs. She is a Board member of the Hands & Hearts Auxiliary for Children for Children’s Mercy Hospital and is a member of the Greater Kansas City Chamber of Commerce’s Centurions Leadership Program, class of 2019. She is Past-President of the Board of Directors of Ronald McDonald House Charities of Kansas City and currently serves on its Advisory Board. In 2007, Diane was named one of Kansas City’s “40 Under 40″ leaders by Ingram’s magazine. A frequent conference speaker, she holds series 7, 63 and 24 licenses.

Sasha Franger is the Director of Thought Leadership for Empower Retirement. In her role, she leads the strategy and execution of thought leadership programs for advisors, plan sponsors and consultants. Sasha believes that we do not just want to live longer but that we want to live well longer, and an important aspect of this is to be prepared financially for retirement.

Seizing the opportunity to build a thought leadership content program from the ground up, Sasha joined the organization in 2016. She has 10 years of industry experience and has also worked as an Analyst with Lipper, a subsidiary of Thomson Reuters, where she created reports for mutual fund company boards, and as a Marketing Manager at Jackson National Life Distributors.

Join Eric and Ed for a discussion about when things go wrong in business.

The view from the jumbo group market — with Greg Baker

In this week's episode, EmsanaRx CEO Greg Baker gives us a bird's-eye view of the healthcare system. Find out what issues jumbo organizations are having and how the PBM is contributing to them. 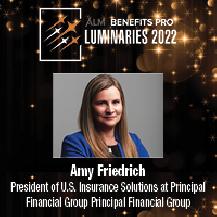 Over the last year, Principal Financial has focused on making paid income protection a top priority for employees while giving those same employees the resources they need to be more comfortable and less intimidated when real life happens.