Lynch's advisor at UBS said, “He understands the transition [to retirement] better than anyone in the NFL, since he’s done it twice.”

Seattle Seahawks running back Marshawn Lynch and his remarks on retirement have captivated many in the industry. “Marshawn Lynch’s financial advice is delivered better than anything I’ve ever said in 12 years of blogging lol,” said Ritholtz Wealth CEO Josh Brown on Twitter.

At a press conference after the Seahawks lost to the Green Bay Packers in the playoffs, Lynch said: “If they was me, or if I had the opportunity to let these young [guys] know something, I’d say take care of your money, because that s— don’t last forever. Now, I done been on the other side of retirement, and it’s good when you can get over there and you can do what …  you want to.” 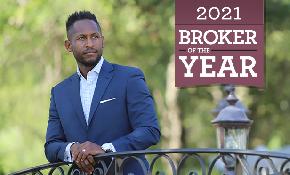 2021 Broker of the Year: Edwige Ligonde

Ed Ligonde's path to becoming a top benefits advisor--and the 2021 BenefitsPro Broker of the Year--also helped make him the ultimate team player.

2021 Broker of the Year: Meet the finalists

Join us August 17 at the Broker Expo in San Diego as we announce which of these dedicated brokers will be named our Broker of the Year.