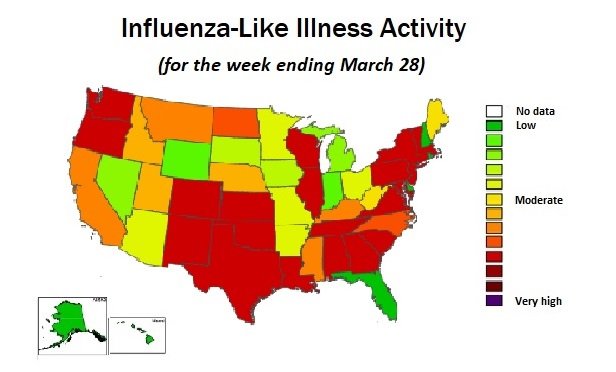 This CDC map shows "flu-like activity" hammering most of the United States in late March... 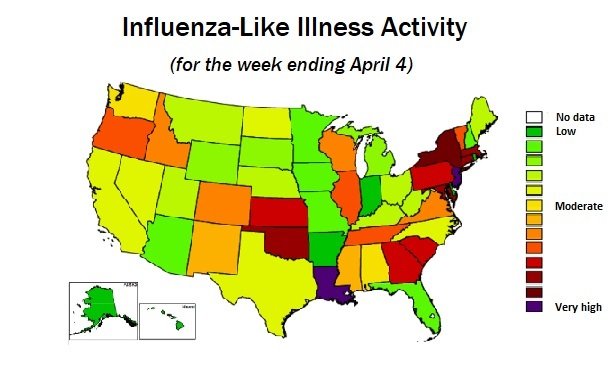 this CDC map shows flu-like activity still hitting hard in much of the country in early April, and... 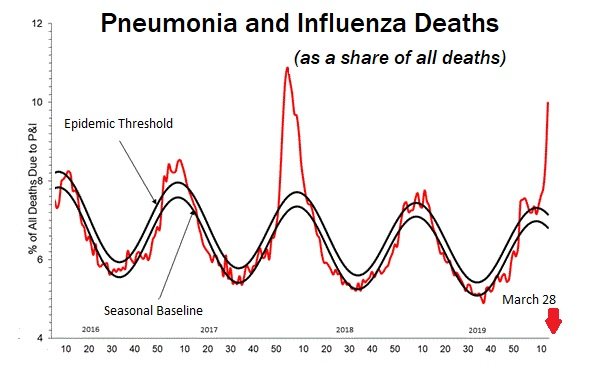 this CDC chart shows deaths from flu-like illnesses and pneumonia spiking in the last week in March. A similar chart for early April is not yet available.

The United States may have managed to keep the COVID-19 pandemic from becoming a major killer.

The virus that causes COVID-19 pneumonia and heart inflammation, severe acute respiratory syndrome coronavirus 2 (SARS-CoV-2), has infected about 644,000 people in the United States and killed about 29,000.

Public health officials worry the pandemic may just be starting to move into some communities.

But the National Center for Health Statistics, an arm of the U.S. Centers for Disease Control and Prevention, has released a weekly COVID-19 activity report with maps suggesting that the United States might be getting the pandemic under control, and that the country still has a chance to hold overall mortality within relatively normal levels.

The CDC bases some of its COVID-19 tracking charts and maps on data on confirmed cases of people with COVID-19.

The CDC bases other charts and maps on data on all kinds of cases of pneumonia and “influenza-like illnesses.”

Even if states had trouble keeping track of COVID-19 cases, a severe COVID-19 outbreak would lead to increases the number of people going to doctor for influenza-like illnesses, or dying from “pneumonia and influenza.”

A severe COVID-19 outbreak that killed people without causing pneumonia would show up in the CDC’s “deaths from all causes” data.

But, even at the end of March, the percentage of all deaths recorded as being caused by pneumonia or influenza was still below the level recorded in late 2017.

The death count totals for the weeks ending April 4 and April 11 are still incomplete. The CDC death count tables for earlier weeks show that, from the week ending Feb. 1 through the week ending March 28, the average number of deaths was about 6 percent below the three-year average.

The map for the week ending March 28 shows high or very high influenza-like illness activity in most of the country.

The map for the week ending April 4, after many states had imposed strict “shelter in place” rules, shows that the activity level in most states fell to a moderate level or lower.

The weekly COVID-19 report also includes a chart show trends in outpatient office visits for influenza-like illness as a percentage of all office visits.

The typical level is 2 percent.

If approved, the ACA waiver will be the first to eliminate immigration documentation requirements for coverage,

In her session at BenefitsPRO Broker Expo in Austin on Monday, Allison De Paoli delivered a pep talk on dealing with change, with practical tips for brokers and advisors.