U.S. employers used more technology-based communication with employees during the last open enrollment and increased face-to-face contact with employees as well, according to a new Towers Watson survey.

Dentists turn to membership plans to meet the needs of uninsured

For patients without a job-based plan, purchasing an independent dental policy is expensive and not always worth the investment. 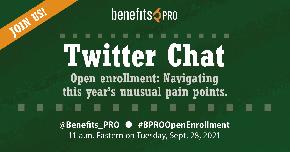 A group of experts will answers questions about the challenges of this year's open enrollment season live on Twitter.